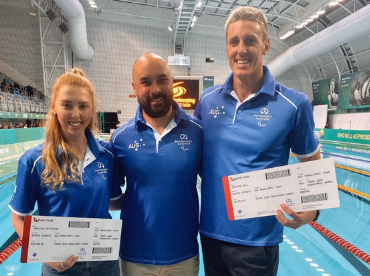 Harley has been on the Australian Paralympic team as a team coach for the past nine years, having begun coaching the team in 2013. He has coached Brenden for nine years and Lakiesha for five years.

“I’ve been told that our program is very intense compared to others,” Harley explained. “We train nine to ten sessions per week in the pool covering between 50 to 80 kilometres depending on our training focus. We also complete two to three gym sessions per week.”

Harley lights up when asked about what makes Brenden and Lakiesha exceptional swimmers.  “Brenden is a widely experienced athlete heading to his fourth Games. He is committed to success, resilient, disciplined and always willing to go one further in training. He has the winning desire instilled in him,” Harley said.

“Lakiesha is incredibly hardworking – one of the hardest workers on the team. She is resilient, willing to learn and willing to train with the boys and their volume of kilometres. Lakiesha also has the winning desire instilled in her,” Harley described.

Harley, Brenden and Lakiesha will be heading to Cairns on the 4th of August to train at the Tobruk pool for two weeks. Following this training period, they will then depart for Tokyo on the 19th of August, where racing will begin on the 25th.

Harley’s advice for anyone who has dreams of participating in the Olympics or Paralympics is to find a coach and program that aligns with your own goals. “Be willing to sacrifice many things including parties and late nights,” Harley advises. “Remember that training for an Olympic or Paralympic Games is a small part of your life. Commonly, we retire from professional competitive swimming before we hit 30. Some athletes are lucky enough to be good enough to keep going past this age and still be competitive.

“I always ask: ‘What person do you want to be in the bar when you’re older? (Do you want to be) the guy who can say with pride that they competed at the Olympic or Paralympic Games or the guy who says I had every opportunity to be good enough to compete at the games but decided my social life in my teens was more important and fun. Swimming can always be fun and outside of swimming can be even more fun. Just work out the balance and you will be able to achieve your best, as happy swimmers are very fast swimmers.”