TRIX3 – The easiest way to do your first triathlon Does a triathlon appeal to you, but seems too daunting? The groundbreaking TRIX3 Indoor Triathlon Series makes it incredibly easy to do your first triathlon, even if you’re not very fit.

The TRIX3 series has the Swim, Cycle and Run legs of traditional triathlons, but you swim in a pool instead of open water, ride a spin bike and run on a treadmill. Held in 20-minute, 40-minute or 60-minute formats, each triathlon takes place indoors in the safe and supportive environment of Belgravia Leisure centres.

TRIX3 is truly the triathlon made easy, says David Hansen, chief executive of Belgravia Events, which has partnered with Triathlon Australia to stage the TRIX3 series in 31 Belgravia venues in Australia and New Zealand, from 9 November to 14 December 2019. “The TRIX3 Indoor Triathlon Series has been designed to make it easy for a person to complete their first triathlon, by providing a fun and safe environment with a short achievable pool swim, stationary bike ride and treadmill run or walk,” David says

The TRIX3 series removes the main barriers to triathlons for most people: the ocean swim, the long group bike ride on public roads and the high cost of triathlon equipment. 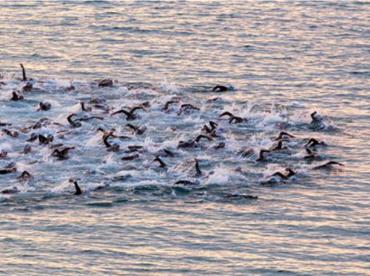 A typical start, in a conventional triathlon.

“The number one reason people are fearful of doing a triathlon is because they’re scared of the open-water swim, of having to jostle in the water with lots of people at the start and fearful of jellyfish or sharks,” David says.

“They’re also fearful of riding on the roads with multiple bike riders. By taking out those two obstacles and making it very easy, by letting them swim in their own lane, riding a stationary bike and running or jogging on a treadmill, they can pretty well do a triathlon – something that maybe they’ve always perceived to be far too hard.”

The cost of triathlon gear is another obstacle for people, says David. A tri bike itself can set you back many thousands of dollars, not to mention the tri suit, wetsuit, hydration gear, watches, running shoes and even transition bags that triathletes use. But you don’t need any special gear for the TRIX3 – just basic and comfortable exercise clothing for the bike and run sessions, and swimwear and goggles for the swim.

Finish with the leaders

In a traditional triathlon, you try to finish the course in the fastest time possible, which means if you’re not fit or well prepared, you can suffer the indignity of finishing hours behind the leaders. In the TRIX3, you try to cover as much distance as possible in a set time for each event, which means you always finish at the same time as everyone else. There’s no embarrassment at being physically left behind!

In the shortest and easiest TRIX3 triathlon, the Tri-20, you swim for 3 minutes, ride an exercise bike for 10 and run on the treadmill for 7. The 10-minute transition periods in which you change from your swim gear into your cycling and running outfits provide breaks between each event, so the Tri-20 is extraordinarily doable.

“A 20-minute event only has a 3-minute swim, so someone could dog paddle one lap and then they go on to the stationary bike and then the treadmill, and they can say they’ve done a triathlon,” David points out.

You can compete in all the TRIX3 triathlons by entering on your own or as part of a team with family, friends or work colleagues.

A great way to prepare for a triathlon For anyone with ambitions to compete in a full triathlon, TRIX3 lets you familiarise yourself with the fundamentals of the triathlon, says Christian Schwaerzler, a triathlete and coach.

“What TRIX3 really does is take the mystery out of it, but in a very controlled atmosphere where all you need is a pair of bathers and some goggles and some running shoes,” he says.

“With the three different levels, people can really dip their toe in the water with the 20-minute triathlon and then they can work their way through progressively to the longer time frames when they feel up to it.”

Christian himself was introduced to triathlons in a similar way many years ago when he began competing in corporate triathlons, which are shorter events also designed to introduce people to the sport.

“It seemed daunting at the time, but when you come out the other end, you think, ‘Holy moly, that was awesome fun, let’s try something a little bit bigger,’” he says, convinced that many who do the TRIX3 tris will feel the same.

Even if TRIX3 is as far as you want to go with a triathlon, competing in your first indoor tri is a great way to kick start your health and fitness regimen for summer because it’s an excellent total body workout, according to Christian.

“It actually exercises all of your body and unlike a lot of single sports, it gives you a cross-section – you’re using your legs, your arms, your core and you’re breathing hard. It’s a complete workout,” he explains. If you want to prepare for TRIX3, Triathlon Australia can help with supervised four- and six-week programs available at each leisure centre. Contact your centre to organise a program tailored to your needs and download an athlete guide for indoor triathlons from trix3.com.au.

The TRIX3 series is open to anyone over 10 years of age and taller than 150cm, which is a requirement for bike safety standards.

All entrants in the event will receive a TRIX3 Indoor Triathlon Series T-shirt ( select the size when you register), a swim cap, insurance to participate and a certificate of completion.  A one-day Triathlon Australia licence is also included as proof that on the day you compete, you are regarded as a genuine triathlete.

To register, go to trix3.com.au and select your triathlon from the three event options: Tri-20, Tri-40 or Tri-60. Next, choose the Belgravia leisure centre closest to you and whether you’re participating as an individual or as part of a group. Then make a payment of $35 and you will have signed up for your first triathlon!

Triathlon Australia also recommends you visit the centre in person to pick up your race pack and check the layout so you’re familiar with it on race day.

Go to https://www.trix3.com.au/ to lock in your spot today!