HOARDS Of Brisbane’s young athletes flocked to the Moreton Bay district this month to participate in the annual Sanitarium Weet-Bix Kids TRYathalon.

Approximately 1,300 kids partook in the three-course event on Sunday, 19th May. The affair began at 7am, as participants gathered themselves at the Pine Rivers Showgrounds to indulge in a free breakfast, and to ready themselves for a big day ahead. As per recent tradition, Belgravia Leisure’s Lawnton site played host to the swim leg of the course.

“It’s always a special day on the Lawnton calendar,” says Centre Manager of Lawnton Aquatic Centre, Michael Fox. “I believe we all walk away proud of being part of this special team. It’s a fantastic event that brings the team together, all with the same conviction to give every kid the best opportunity to finish!” Local dad, Ricky Gawa, had nothing but praise for the spectacle. “It was a well-organised event, with amazing and helpful volunteers,” he recalls. “It was nice to see some inspirational motivators cheering the little athletes on!”

Unsurprisingly, Trickett and Hall weren’t the only national heroes who’d travelled to the region for the big event. TRY ambassador and professional surfer, Alyssa Lock, was stationed at the finish line to hand out medals to all the wonderful TRYathletes who’d completed the course. 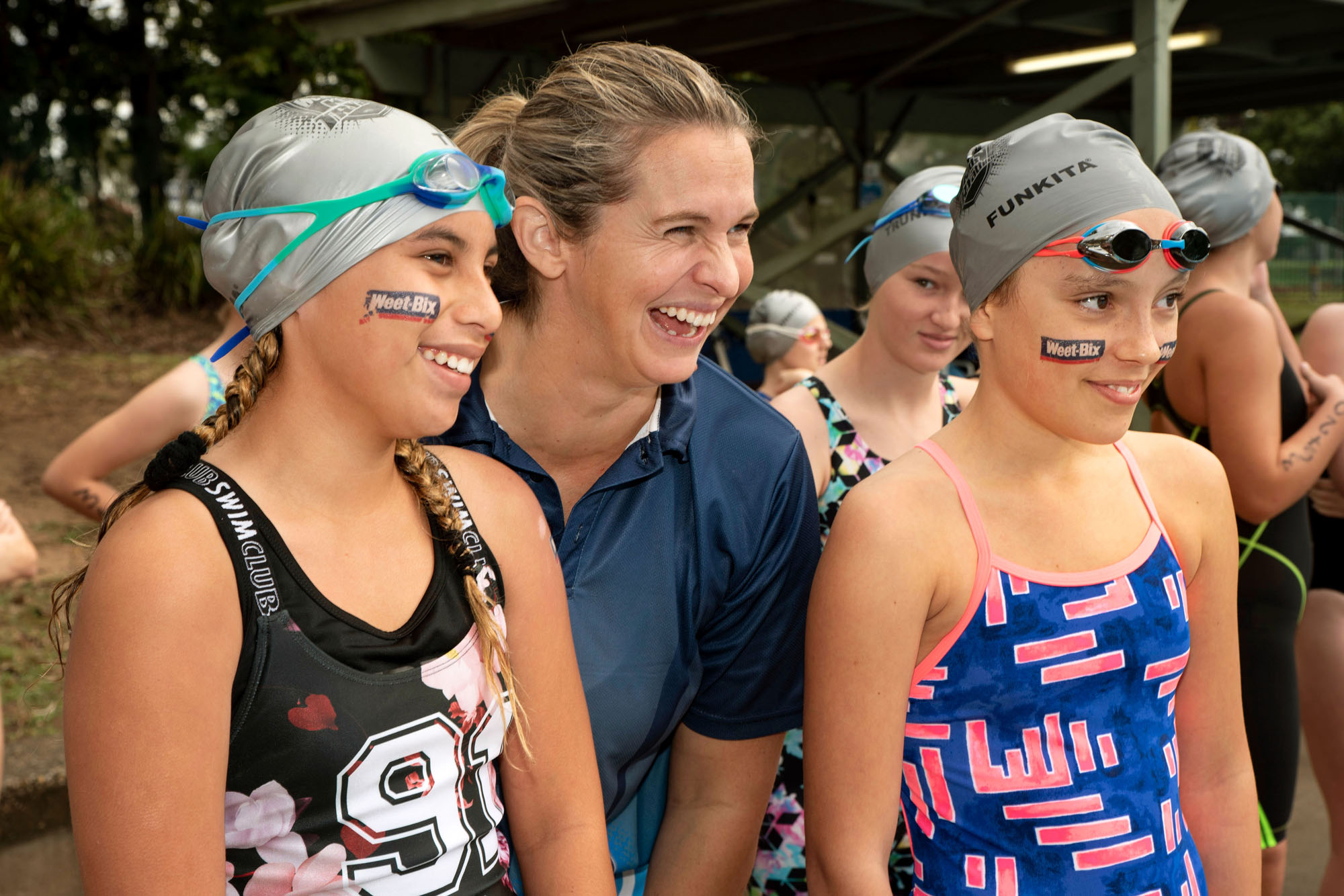 Another notable name at the pool was Tevita Pangai Junior, of the Brisbane Broncos. Pangai could be seen chatting up a storm with the kids, leaving some little football fans spellbound.

The Sanitarium Weet-Bix Kids TRYathlon thanked its official sponsor, the Queensland Government, as well as its official partners, of which it had many, including Funkita Funky Trunks, Asics, Elastoplast, Triathlon Australia, Bupa Health & Care, and more.

The event was open to children between the ages of seven and fifteen. Those who found themselves in the lower age bracket faced a 75-metre swim, a 3-kilometre cycle, and a 500-metre run. While their older counterparts took on a swim leg of 150 metres, a cycle of 6 kilometres, and a 1-kilometre sprint to the finish line.

Lawnton native, Sophie Carroll, aged 10, felt confident as a volunteer guided her toward the edge of the Olympic-sized pool. “I’m not worried about the swim or the run … it’s the bike bit that I’m not looking forward to,” she confessed with a nervous giggle.

Growing ever more eager in the wait, she took her place on the edge of the water and awaited the signal. Once given, she took a huge gulp of air, like all those beside her, before plunging into the crisp pool – the subtle signature of a rainy day.

To bystanders, it was like watching a school of fish in motion. Bodies were grouped together in such tight formation that it became difficult to distinguish one competitor from another. New waves of kids entered the pool in tandem, sporting colourful caps aplenty. 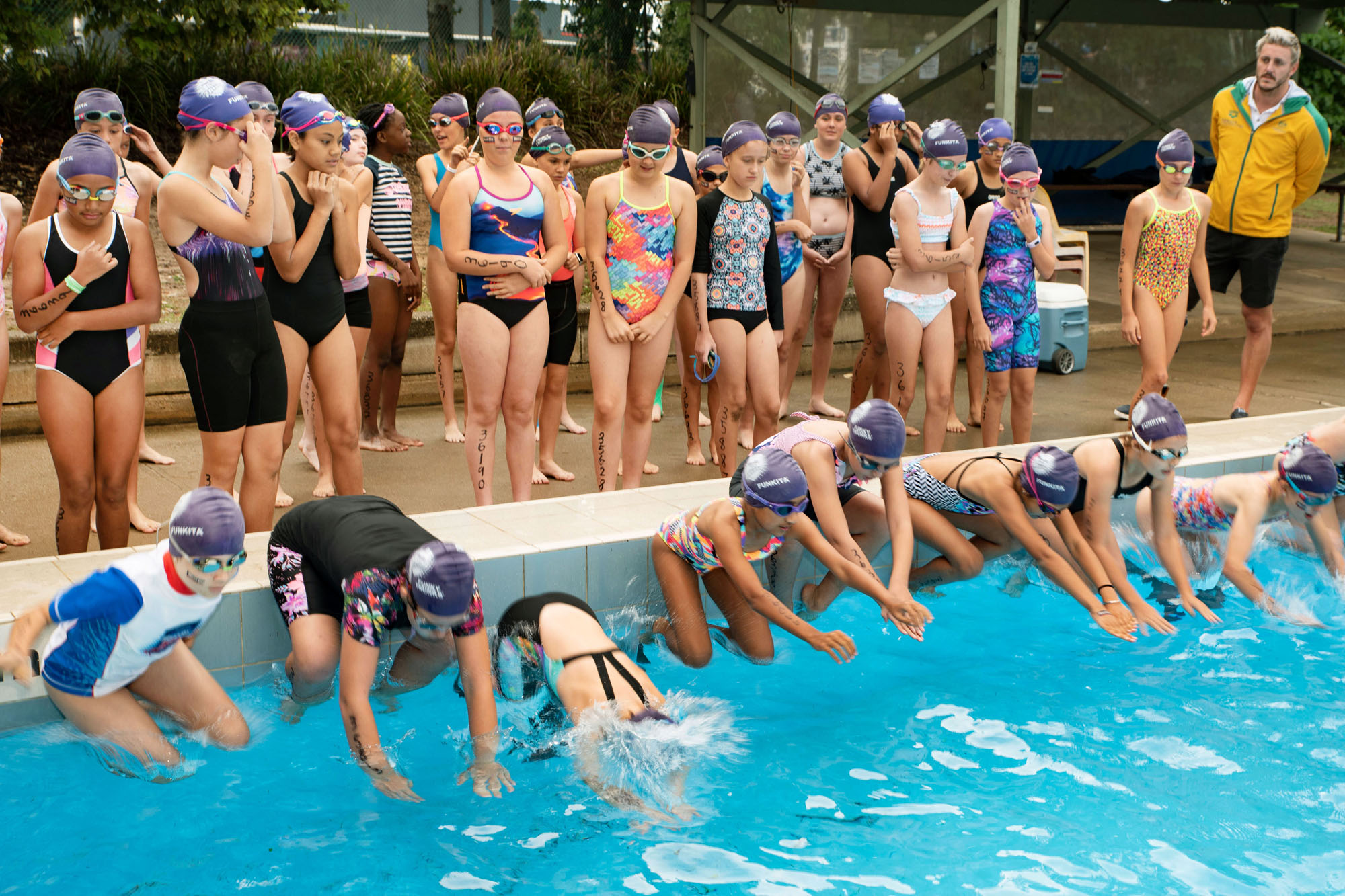 Sophie’s legs beat down hard against the water’s surface, while her arms worked tirelessly to draw her further forward with each new stroke. Together, the TRY stars found themselves swimming past a dozen lifeguards, all armed with an array of pool noodles. They were positioned in and around the water at all times to ensure the safety of every participant.

Once swimmers made it to the end of the pool, they hopped out and made their way on foot to the showgrounds next-door to swap swim cap for a helmet. Once riding was done, they took to Lawnton Pocket Rd, which had been shut down by the local council for the final leg.

The street came alive with huffs and puffs as children and teens alike closed in on the finish line. Footfalls rained down hard on the bitumen until finally, the last runner came in. A large inflatable dome marked the end of their efforts, and each child was met with a prize.

David Martin, the National Community Engagement Manager for Sanitarium had this to say, “ The Sanitarium Weet-Bix TRYathlon series provides an opportunity for kids to enjoy healthy outdoor activity and boost their self-esteem in a fun, friendly, and non-competitive environment.”

It is expected the event will return to the Moreton Bay district again in 2020.